Mule connector testing is a necessary step of its implementation. The following different types of testing are considered here:

Functional tests, which purpose is to verify whether the connector’s behavior is right (the work of processors and methods that work with metadata, operations with WSDL, etc.) in various Mule versions. Therefore, these tests are needed to verify compatibility with other Mule versions.

System tests are necessary to test connector methods, which establish connecting to external services, and to test the work of the connector in case of an incorrect configuration. These can be the following test cases: invalid password or login, invalid server of authorization, etc. Within these tests, all classes with configurations should be tested.

Unit tests are not obligatory ones, but are recommended to be used for testing of separate pieces of code, that have left uncovered after performing system and functional tests.

Load tests are not obligatory for complete certification, but can be implemented for studying the behavior of the connector under conditions of heavy use.

An example of system and functional tests implementation can be found in the reference project for the implementation of the Mule connector to the social network VK.

Organization of tests at the packages level

A strictly defined package structure should be used to complete certification:

For various utility classes, org.mule.modules<Connector-project>.automation.utils.
package can be used.

Functional tests should be carried out to complete certification. These tests should cover the code for all processors, classes working with metadata, operations with WSDL and methods marked with @Source and @Paged annotations. For this purpose, Mule provides Connector Testing Framework (CTF).

The structure of the class, that uses CTF Names of the functional tests should have TestCases ending. For example, CreateEntityTestCases.

All classes with tests that use CTF should be inherited from AbstractTestCase<ConnectorName> class and call a parent class constructor.

Also, a separate class that will be inherited from AbstractTestCase<ConnectorName>, will call a parent class constructor and create data for tests, can be created. Then this class will be a parent for classes with various test cases.

In the setup() method, marked with @Before annotation, creation of the necessary data is performed. To generate test data, TestDataBuilder.java class should be created in org.mule.modules.<connector-project>.automation.functional package, which will return the necessary data: 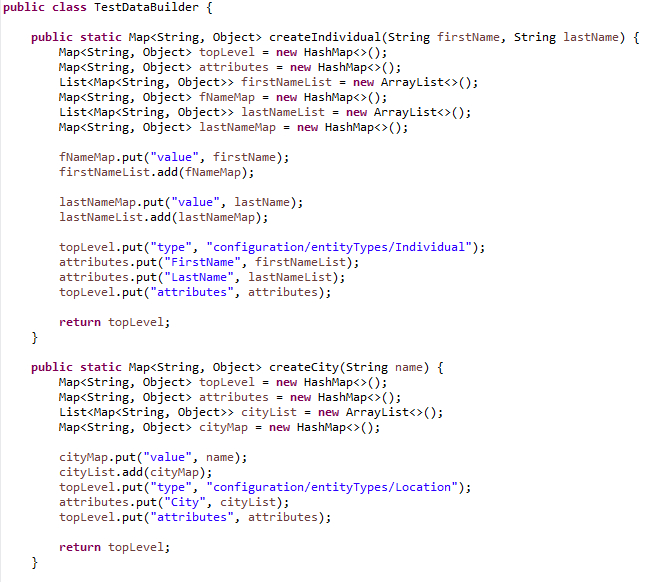 Reset of sandbox takes place in tearDown() method, marked with @After annotation.

If it is possible, each processor of connector should be covered with tests.

A class with tests for processors should have the same structure as all classes that use CTF.

The test case for processor is as follows:

To call operation of connector, the connector object should be got with the help of getConnector() method, which is given by CTF.

Dynamic DataSense was used during development of connector for MDM system. DataSense testing has been performed in the following way:

Each DataSenseResolver of connector should be covered by tests if it is possible.

The class with tests for DataSense should have the same structure as all classes that use CTF.

An example of this testing : 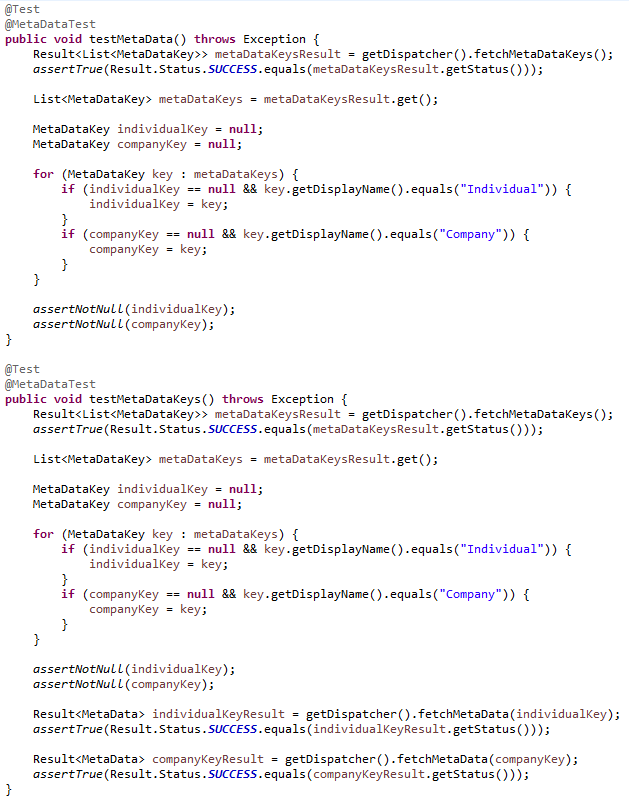 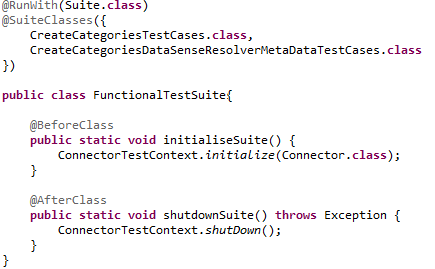 These tests are obligatory for certification. This type of tests includes all tests that are not functional, but at the same time they require connection. For example, this is testing with an incorrect password or login, an incorrect address of authorization server, etc.

To conduct system tests, the valid properties are taken from the automation-credentials.properties file, which is used in the functional tests, and after that some correct data are changed to incorrect ones. 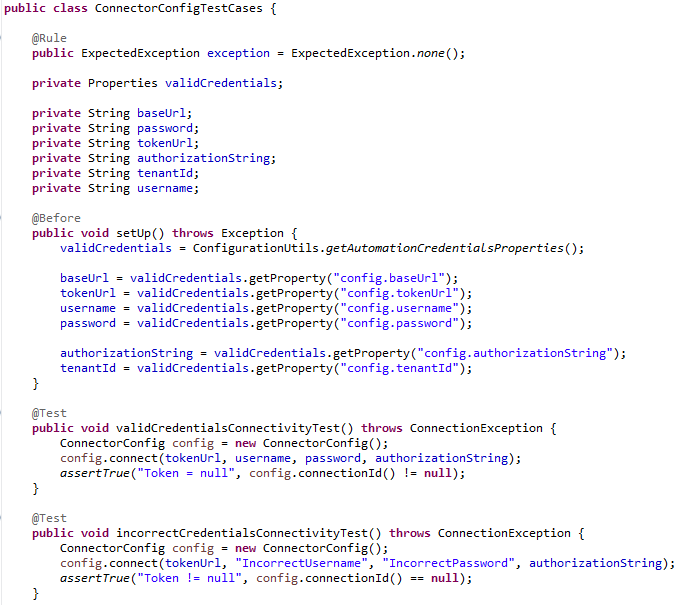 Unit tests are not obligatory for connector certification. However, if there remain sections of code that should be covered with tests after completing the functional and system tests, unit tests are used for this purpose.

Names for unit tests should be chosen according to JUnit naming conventions (class name should have endings Test or TestCase). It is not necessary to combine unit tests into TestSuites.

Tests can be run using Maven from the command line or in Anypoint Studio.
An example of a command to run system tests from Maven:

Result of the command:

Press right mouse button on the test or TestSuite, Run As -> JUnit Test to run tests in Anypoint Studio.

The result of tests in the studio is as follows:

Load tests also are not required for connector certification, but they can be used for studying connector’s behavior in the case of heavy usage and its efficiency. Apache JMeter can be used as one of the tools for conducting load tests. In this case Mule flow, that uses connector and has HTTP listener connector as an entry point to the application, can be built: 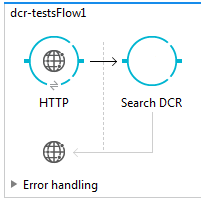 In this case, JMeter will make calls to the address set in the http-connector.

Also, there can be made a comparison of connector working time with working results of components which are part of Mule (for example, the HTTP or Database connector). Based on these results, efficiency of connector is evaluated and conclusions are drawn about the need to optimize performance of connector.

An example of flow for connector testing: