This article will discuss the use of Selenium-Webdriver, which is a tool for automating the actions of a web browser on Node.js platform.

At one of the projects, we had the task to develop Web UI autotests. One of the wishes was to run tests on the side of the frontend developers using only Node.js features, without using third-party applications.

Historically, Java and Python were considered the standard for test automation for a long time. Therefore, if you conduct a survey among automation engineers, then with a high degree of probability they will choose one of these programming languages.

Why is this article important? Indeed, on the Internet, you can find many articles and examples of how to implement UI tests using Selenium-js. However, when they are studied in detail, it turns out that the examples in these articles are quite simple, while examples using PageObject model are much more difficult to find. Therefore, if you want to know a little more, let’s go ahead.

About the difficulties of choice

The key requirement that confronted us was that autotests should be written on Node.js. Everything else could be chosen within wide limits. The first choice on a difficult automation path was the choice of a test framework.

A huge number of libraries have been written for Node.js, so in order not to get lost in this variety, we have allocated several frameworks for ourselves:

Experience with Java in this area pushed us to look for a similar solution to JS, and we chose Mocha. Therefore, it was decided to refuse of using other more exotic frameworks.

Using Mocha, we get the necessary minimum and nothing more. And besides this, Mocha is one of the most popular Node.js frameworks with a fairly active community and a lot of documentation. But with all the advantages, it also has a drawback – this is the lack of asserts.

Therefore, it was decided to use the third-party Chai library for checks. Connection is simple – you need to enter only one line, and a bonus to this will be the ability to use any of the assertions styles: assert, expect, should.

Since at the stage of choosing the framework we refused to Protractor, then we had to choose the “communication mechanism” of the tests with the browser. And here, too, JavaScript can boast a variety, here are the most basic candidates:

The choice fell on Selenium-webdriver, since this is a classic solution for this task, the methods of working with which are practically the same as those in Selenium on Java.

In this section, samples of code executed on specified technologies will be given. 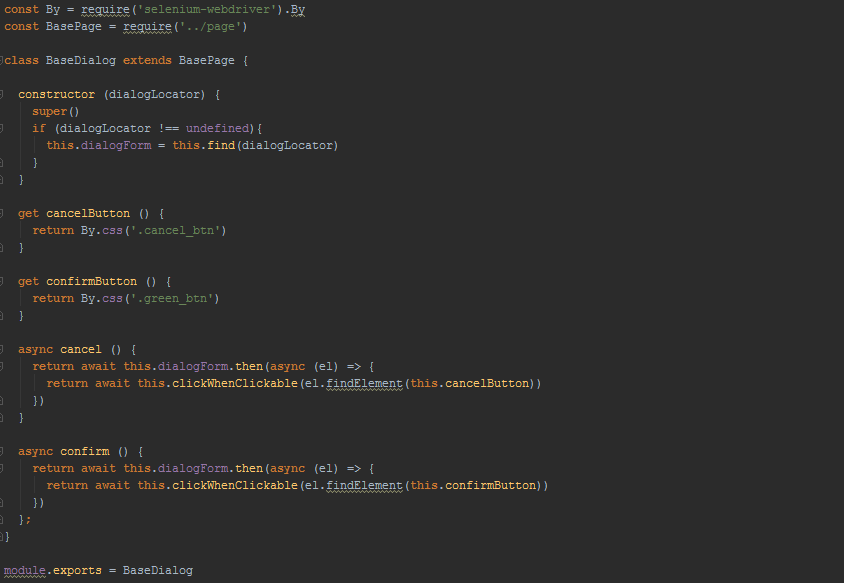 This class is also a part of PageObject, it implements the base class of BaseDialog. As can be seen from the screen, in the new dialog, the processing of one more “Save” button is added.

The base class of BaseDialog dialogs has many implementations (for example: error dialog, delete dialog, etc.). 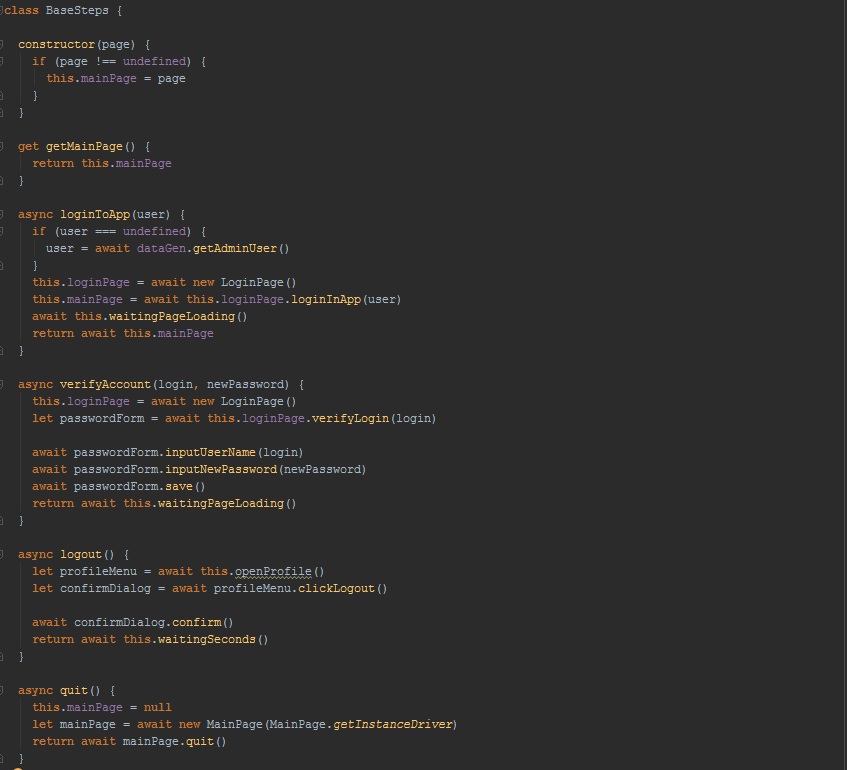 In this screenshot, we see a part of BaseSteps class. This class contains a set of common methods that will be needed to implement any scenario (for example, login to the application, logout, etc.). The class is the basis of the steps layer.

Special cases of steps are inherited from this class, so the steps layer also represents a separate OOP model.

Here, you can evaluate the approximate form of a regular test performed using PageObject.

As you can see in the screenshot, the test itself is very compact. It clearly shows the input parameters, some action with them, and at the end one control check that the data is formed correctly.

Can Node.js tools be used for web UI testing? Of course, they can, but you need to be prepared for various kinds of difficulties, such as:

And here is a list of the benefits we got using this approach: