Message oriented middleware (MOM) is а specialized software aimed at working in the environment of several services and for integrating these services by exchanging of asynchronous messages. This article will consider:

To understand the pros and cons of MOM, we will compare some approaches in software development:

Some features of two-link architecture: 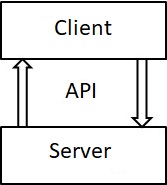 The two-link architecture is suitable for small applications with a small number of users, queries or data for the reason that its horizontal scaling is difficult.

Some features of three-link architecture: 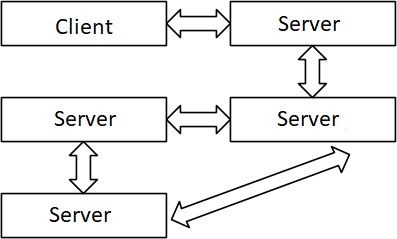 To solve some problems of two-link applications, the transition to a three- and higher-link system helps.

In this architecture, it is possible to add server instances (clones) to increase and parallelize the load, i.e., to perform horizontal scaling. You also need to consider a little more complex development and testing – to design and develop so that there is the possibility of horizontal scaling.

Sooner or later, a monolithic application begins to become so complex that it needs to be divided into smaller logical modules/services, thereby facilitating the support and development of these small modules/services. In addition, the duration of work of different logic located on different servers can differ by several orders of magnitude (10, 100 and higher times). This is due to the logic that is in these calls.

After splitting into modules or adding modules/services, the question of the simple integration of these modules into one network arises, without refusing from the advantages of the N link system. In this case, you need to follow a unified approach in building the API. 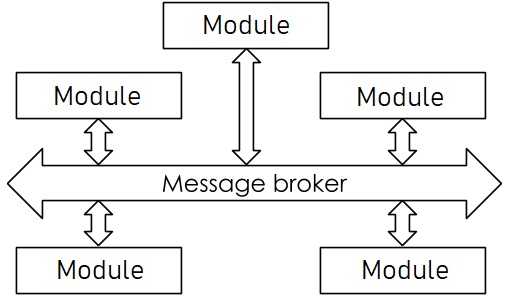 The APIs of this middleware offer a set of functions that allow the integration of many services without going into the infrastructure and implementation of the network. That is, the modules communicate with each other through Middleware and nothing prevents each participant from both receiving and sending entities to another service.

Subsequent changes in the infrastructure and/or network do not entail changes in the applications. Perhaps you only have to change the network address of the Middleware server (if it, of course, moves).

Middleware is independent of other network services. Middleware architecture is very scalable – it’s enough to just create the clone of the required service.

The main essence of this software is messages that are used instead of the usual HTTP. A message is byte information that should be suitable for the API server, usually in JSON format. In the RabbitMQ implementation, messages are transmitted using the AMQP protocol (Advanced Message Queuing Protocol). In our article, messages and AMQP will be discussed below.

This architecture is asynchronous, i.e., in comparison with three-link applications, there are no locks when requesting from service to service.

It is worth noting that RabbitMQ is a database that can store messages in itself. This feature allows to store the facts of a request from service to service, even if the final recipient (service) is missing, turned off, faulty, etc. Messages are also stored internally when RabbitMQ itself is turned off.

Our project uses such a scheme of communication between services for several reasons:

Features of communication via AMQP protocol: 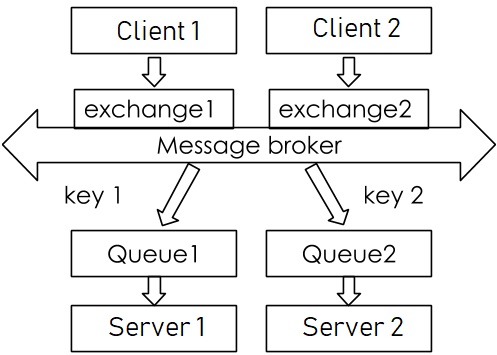 The work of Message Broker, which RabbitMQ represents, can be described as the work of a post office. 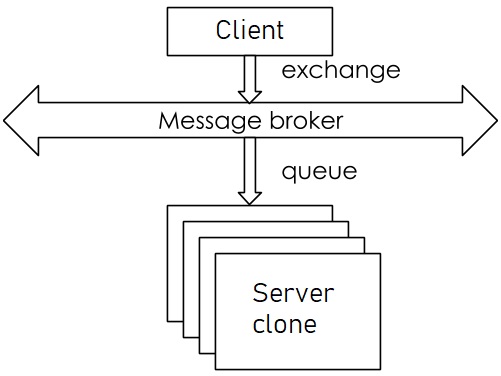 It is necessary to take into account the fact that one message that appears in the queue will be read once and only once. This is a plus towards simple scaling – it’s enough to just raise several clones of one service and configure them to read messages from the same queue. Since the same message will not be read by several servers at the same time, conflicts are eliminated.

One of the main differences in the architecture using Message oriented middleware is the fact that the interaction between the services is asynchronous, in contrast to two- and three-link systems, where communication is usually synchronous and is carried out via HTTP. To compare the features of synchronous and asynchronous interaction, the following table is provided:

This article is not a call to use RabbitMQ everywhere, instead, the purpose of the article is to present the pros and cons of some approaches in software design and development to the reader. A balanced choice of an approach should be made individually for each of the developed products.