The article is intended for people familiar with Selenium technology, since the article is referred to launch of Selenium tests on CI platform CircleCI. But first, let’s deal with the basic concepts of this topic.

Continuous Integration is the practice of software development, which is to perform frequent automated project builds to quickly identify and solve integration problems.

On a dedicated server service (Job) is organized, which includes the following tasks:

Builds can be carried out:

One of the main differences of CircleCI from others CI is that assembly of a build takes place in the cloud, that means there is no need in a local build machine. The service allows configuring build testing flexibly, since a user has access to sudo. As well, there is a local version that can be deployed in a private cloud.

As an example, let’s use the test project on node.js, which comes with the selenium-cucumber-js library package. This project is a bundle of Selenium + Cucumber, in fact, it doesn’t matter what technologies are used, the main thing is that the project works on Selenium.

To run selenium tests on a remote CI, there are several options:

We’ll use the second option, as Selenium Grid components are easy to configure on CircleCI.

To configure, it’s necessary to slightly modify our project.

It’s necessary to add a new catalogue .circleci in the root of the project and create config.yml file in it.

config.yml is a CircleCI configuration file, the environment, various commands and launch parameters for our application are described in it.

In docker section we specify docker images we want to use, in our case these are: 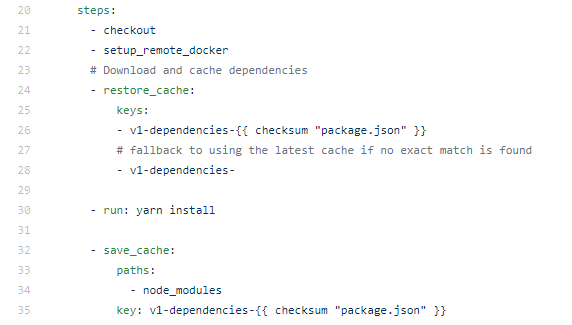 This piece of code was generated automatically, in fact, there is a final setting of the environment, the installation of components.

To view the results of the tests after the completion of job, you need to open the step – launching of Selenium-node container within the grid net with Chrome browser installed and configured.

In order for our tests to run not locally, but work through the Selenium-hub, you need to modify the file, or perhaps it is a class, that is responsible for configuring of web driver.

In our case, this will be the file chromeDriver.js: 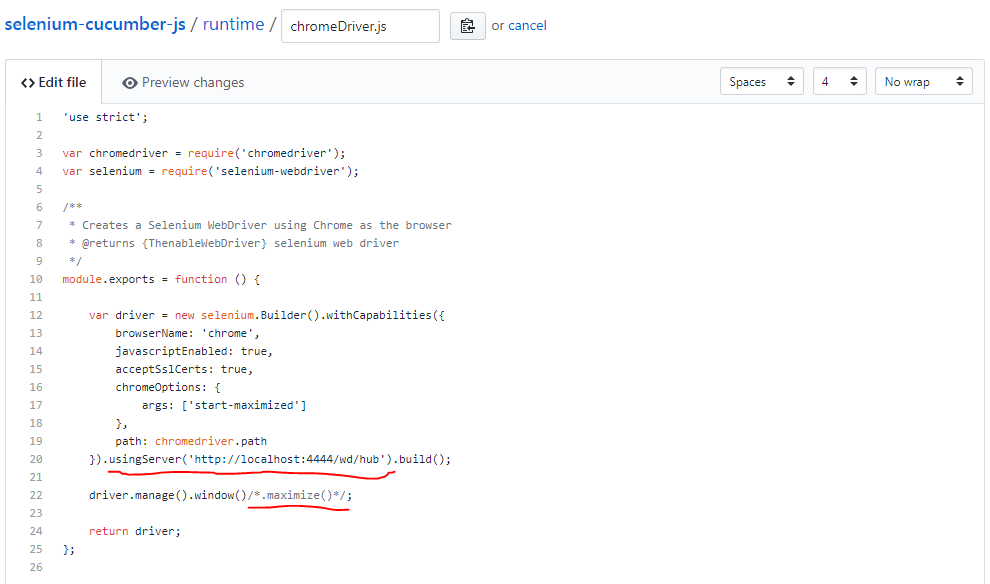 All we did was indication that the web driver should use the external Selenium Hub to run the tests, which in our case is available on localhost via port 4444 (the installation and configuration of the hub was covered in the previous section).

Our test project is ready, now we can upload it on github, as it was said earlier, CircleCI has synchronization with github accounts.

Let’s log in to github, create a new repository and upload our project into it.

Here is a link to the test repository:

Now go to the ADD PROJECTS section. Here we see our project, which we previously uploaded to github. Select Linux operating system and click the Set Up Project button of the right project.

In this form, we see the basic configuration of the project and the steps to install the job config file: 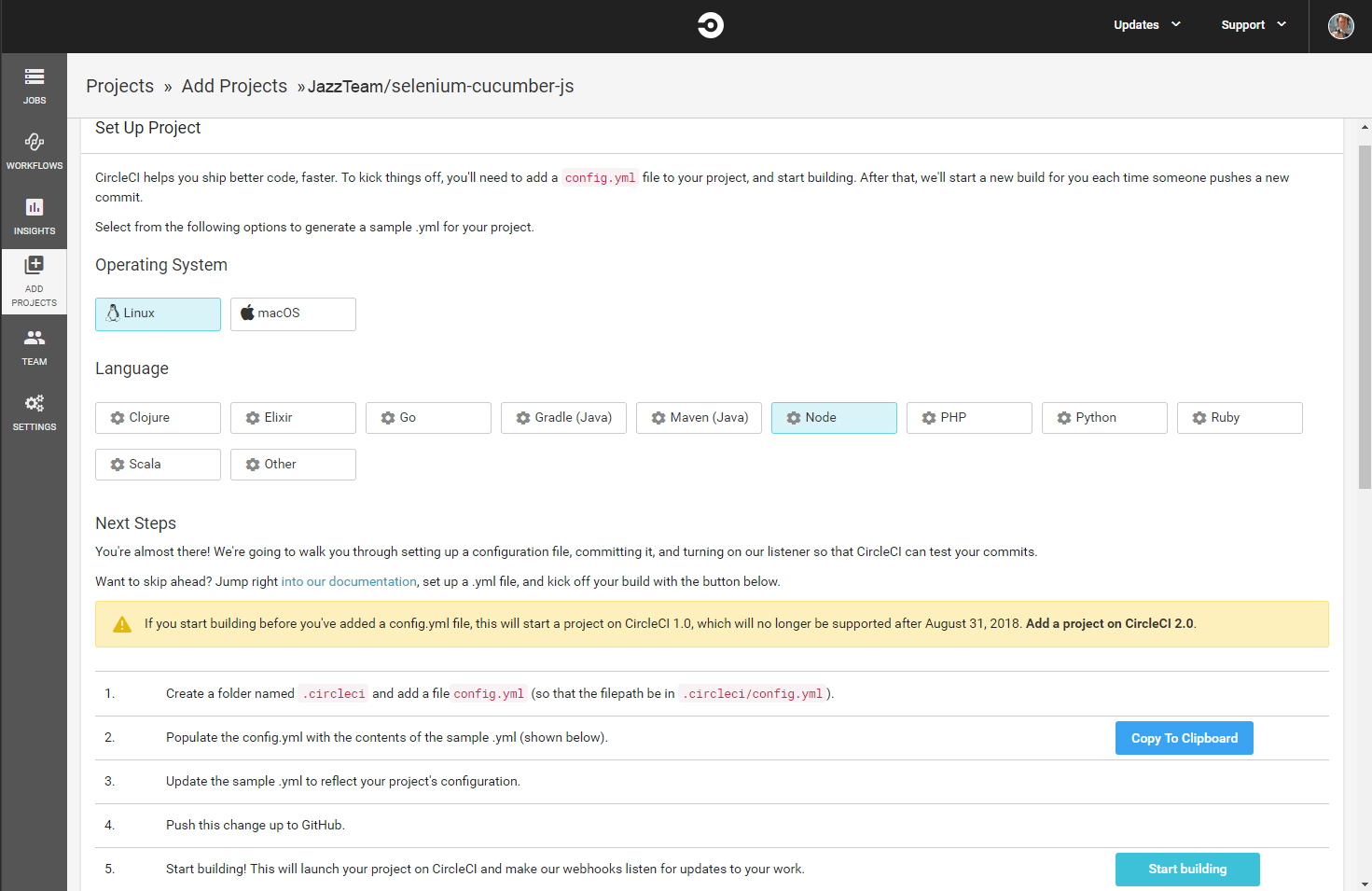 Scrolling below, we see an example of a config file of job, which was generated with the system according to our configuration. It was it which was taken as the basis of the configuration, which we had considered earlier. 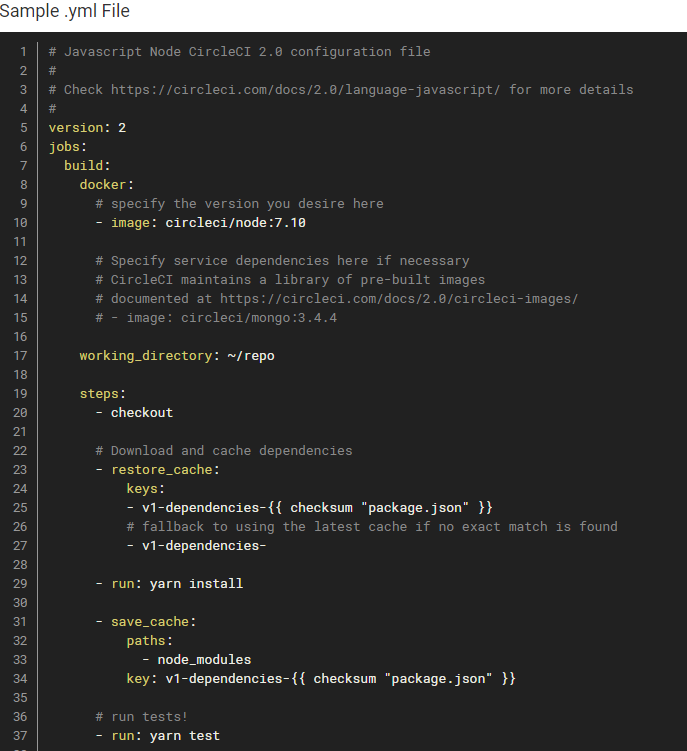 Then let’s run our tests and press the Start Building button.

In real time, we can observe the process of building a project and running of tests, by clicking on any of the steps, we will see its logs.

To view the results of the test’s execution, at the end of the execution of the job, you need to open step run tests. 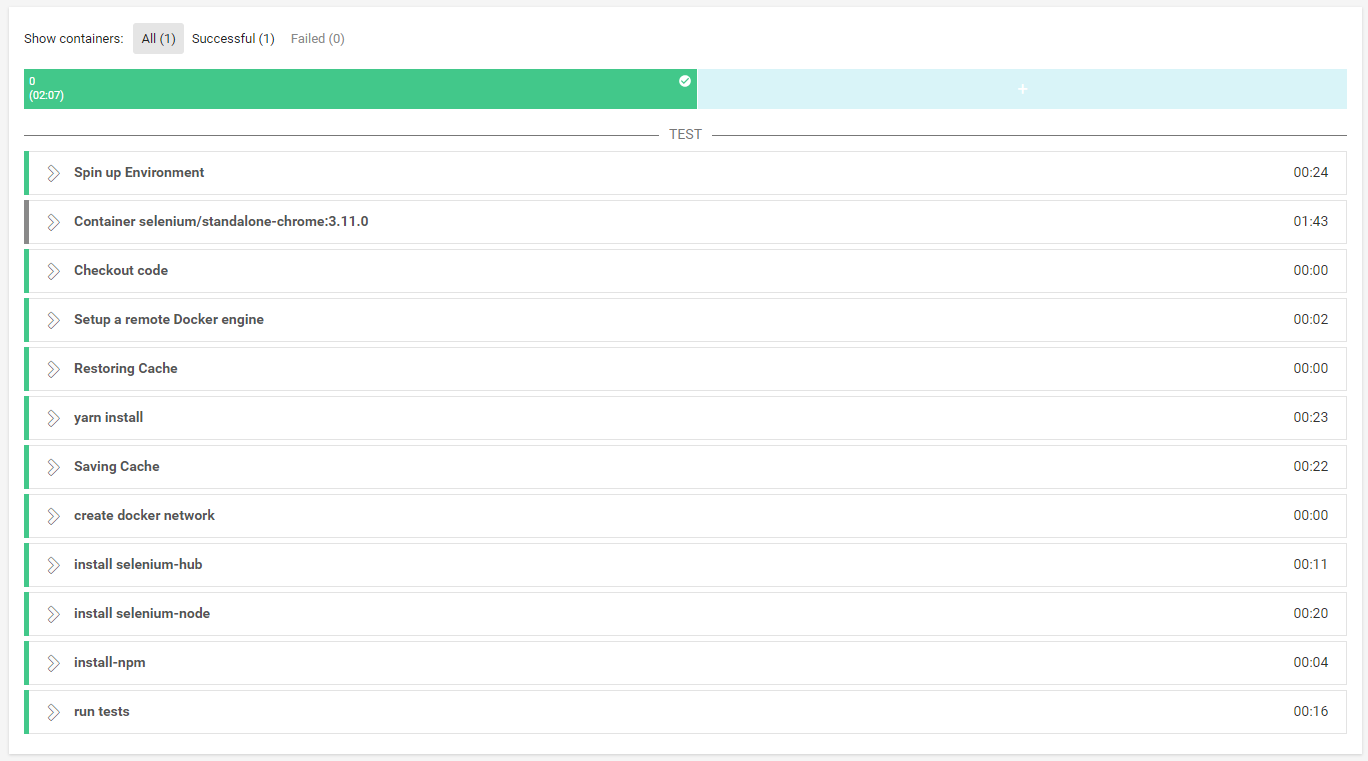 An example of run tests open step with logs of passed tests: 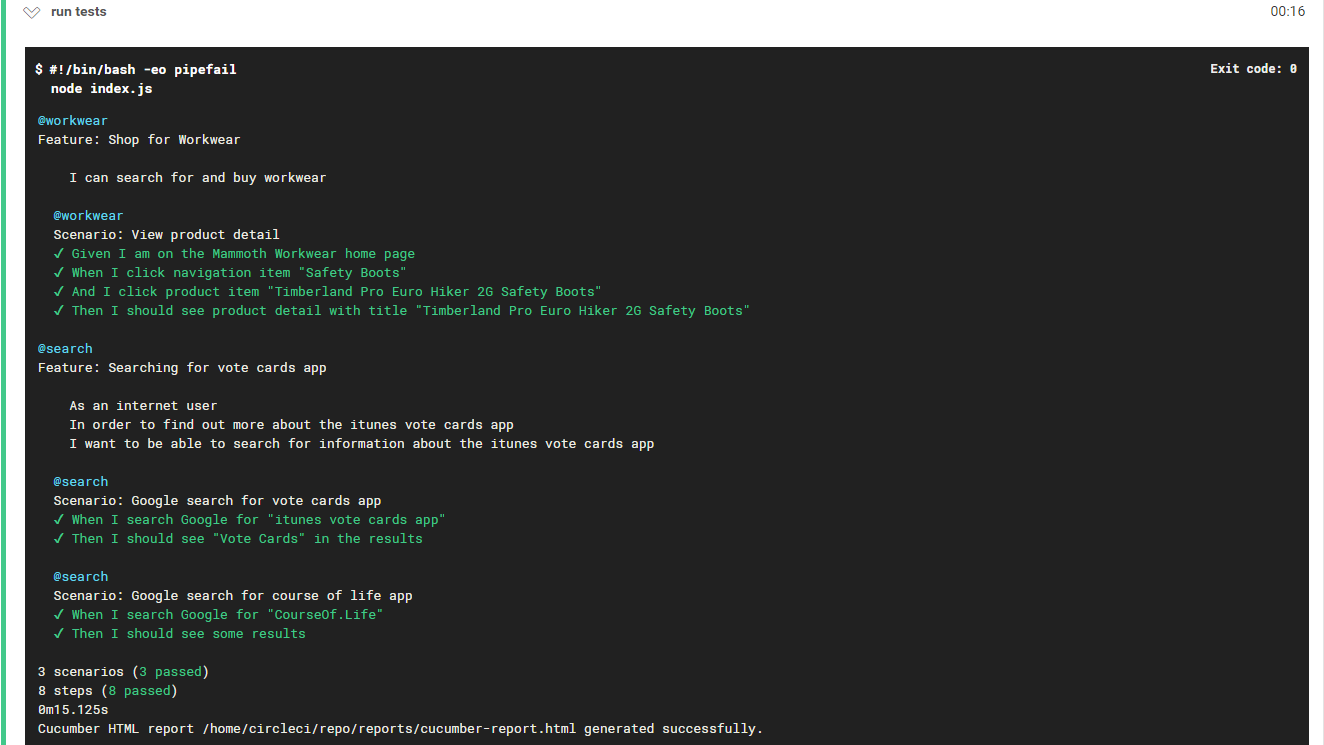 Now let’s see what will failed tests look like. To do this, we will change the expected result of one of the tests to a knowingly false one:

As soon as we commit our changes to github, a new build according to our job will be automatically initiated, and it will fail as it is expected: 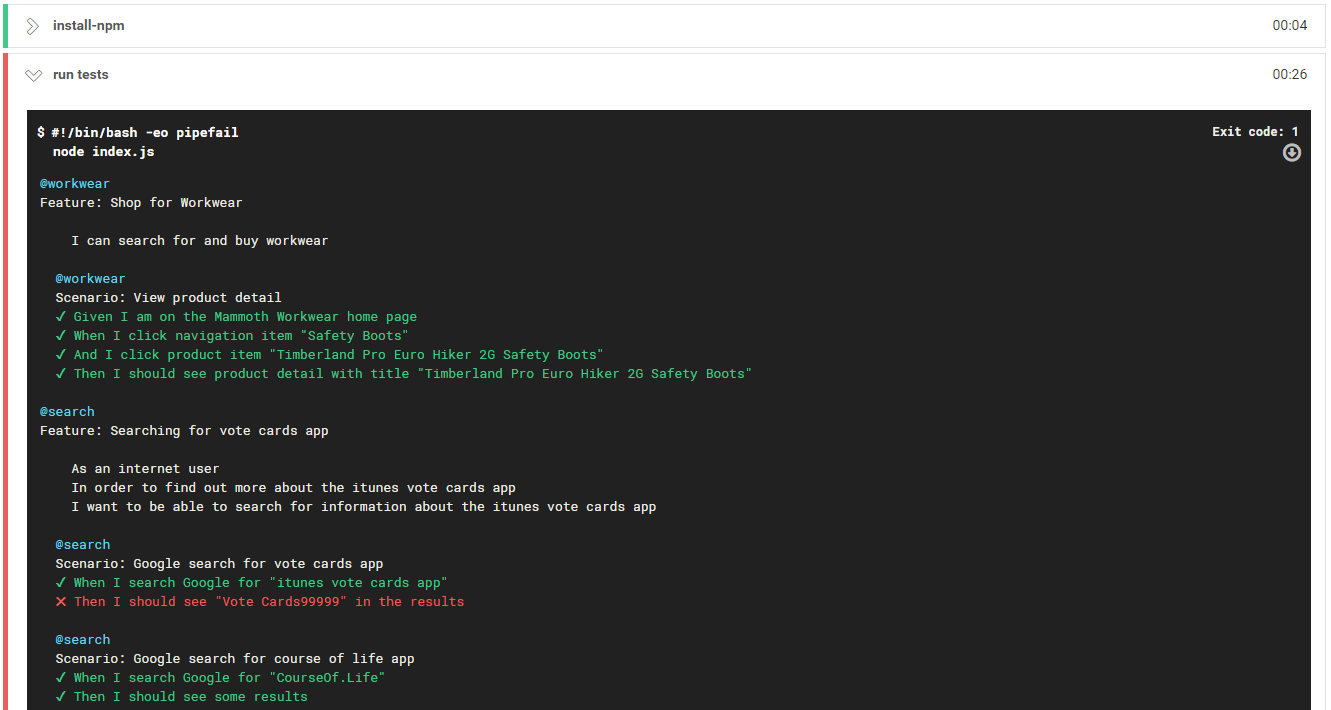 In the log, we clearly see the reasons of the test failing.

CircleCI is well suited for small projects in which it’s necessary to run continuous integration as soon as possible. Due to the integration with GitHub, it is suitable for open source projects.

Jenkins and systems similar to it, I recommend for use on large projects that require a serious setting of the environment. In Jenkins, you can configure anything with plugins, but it will take a lot of time.

Which CI to choose depends on the needs of your project.

Inspired by the following articles:

Continuous Integration: CircleCI vs Travis CI vs Jenkins vs Alternatives