Installation and configuration of Appium

Appium is an instrument for automatization of mobile applications, using Webdriver API. It represents an HTTP server, developed using NodeJS, which creates and processes WebDriver sessions. In its work, Appium follows the same approach as Selenium WebDriver, which receives HTTP requests from clients in JSON format and transforms them depending on the platform it works on.

Appium, perhaps, is one of the most famous instruments for mobile applications testing. The basic Appium principles:

Using of these four principles give the main opportunities to Appium:

Of course, Appium is not perfect. There are also some disadvantages:

For Appium installing, we need to carry out the following steps:

Installation and configuration of Android SDK

Android SDK is a universal mobile application development tool for Android operating system. A distinctive feature of the Android SDK from common editors for code writing is the presence of extensive functionality that allows to run testing and debugging of source codes, evaluate work of the application in compatibility mode with different versions of Android OS and watch the result in real time.

Android SDK supports a large number of mobile devices, among which are: mobile phones, tablet computers, smart glasses (including Google Glass), modern cars with on-board computers based on Android OS, televisions with extended functionality, special types of watches and many other mobile gadgets and overall technical devices.

For work, we need to install Android SDK (SDK tools package) with support of API Level 17 or later.

At first, it is necessary to create the environment variable ANDROID_HOME

After that, it is needed to download necessary packages with the help of Android SDK Manager: 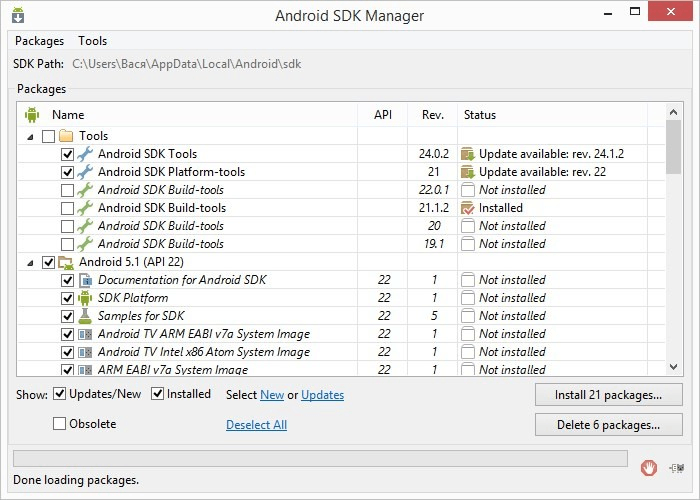 Installation and configuration of Android device

In order for the Android device emulator to work at a speed close to the work speed of a real device, you need to install Intel Hardware Accelerated Execution Manager. This will help reduce the time to run and debug the application.

Using Intel HAXM you can run several copies of Android emulator on one computer without worrying about productivity, system load or about interface “brakes”. Such an approach can be rather useful in an iterative process of creating and testing of applications, it can give a huge increase in developers productivity.

Android emulator images that are intended for architecture, which is different from x86, can run slowly and respond to user’s commands with delay. In addition, unlike some third-party produced Android emulators, with the help of Intel HAXM you get the opportunity to work with the latest versions of API and Android platforms right away after their release.

Visit the website https://software.intel.com/en-us/android and download installation package for your platform. Unpack the package to the extra’s directory located in the directory, where the Android SDK was installed, go to that directory and launch the Intel HAXM installation and follow the tips of the installation wizard.

During the installation, you will be offered to determine the amount of allocated RAM. You can leave the value by default. If during the work, you want to change this value – run the installation once again.

During the installation process, this error may occur

In this case check the settings in BIOS, perhaps virtualization by default is disabled.

In order to check that everything is installed correctly and works, you need to run the following command line:

After executing this command, you will see the current status of the service.

Now it is needed to install the emulator which will work with Intel HAXM.

It is installed with the help of Android SDK Manager. Run, tick images we are interested in and install. 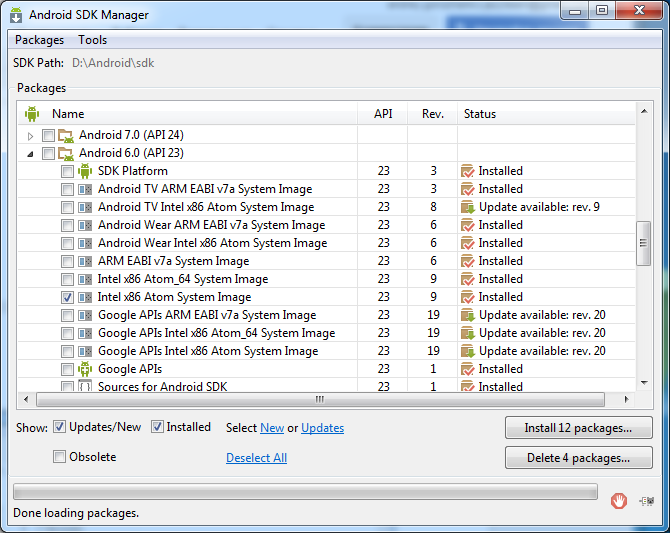 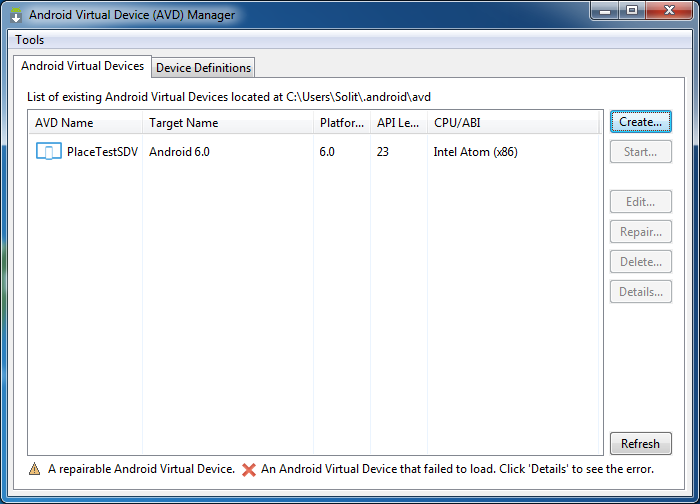 Press Create button and fill the parameters with the new AVD. 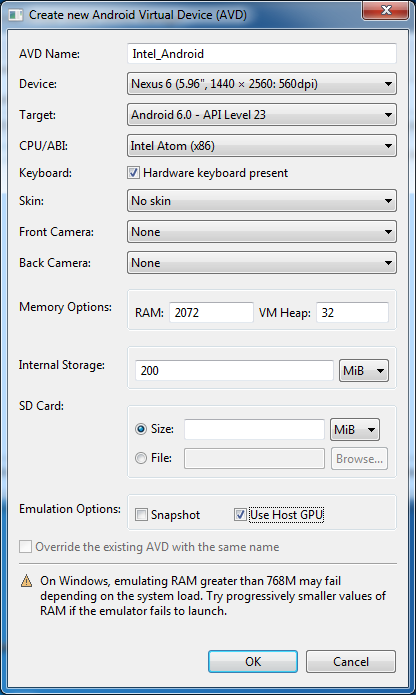 We run and check whether everything is configured correctly. Next, go to the settings and find the name of the device. If everything was done correctly, in the “Model number” field, we will see the line “Android SDK Build for x86”. 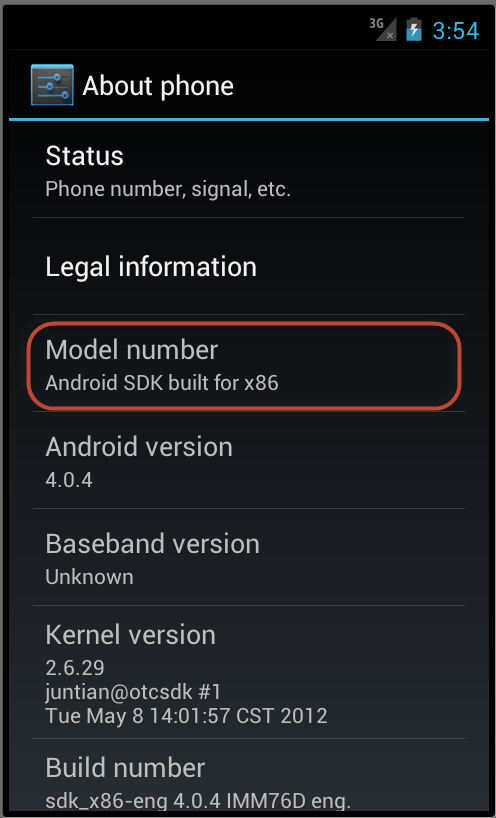 With the help of Android SDK manager (or manually, in the directory \extras\google\usb_driver\) it is needed to install and configure ADB, Android Debug Bridge.

ADB, Android Debug Bridge, is a command line utility with which you can copy files to and from the device, install and remove applications, perform backup and restore, and much more using commands.

Then, on a real device, you need to switch on USB debugging. To learn how to do this, follow the link

After switching on USB debugging, unlock your smartphone or tablet. Do not use the USB 3.0 port, only USB 2.0 while connecting to a computer.

When the device is connected to the computer for the first time, there will be a query to trust the computer: tick the box and click OK. USB debugging is turned on. 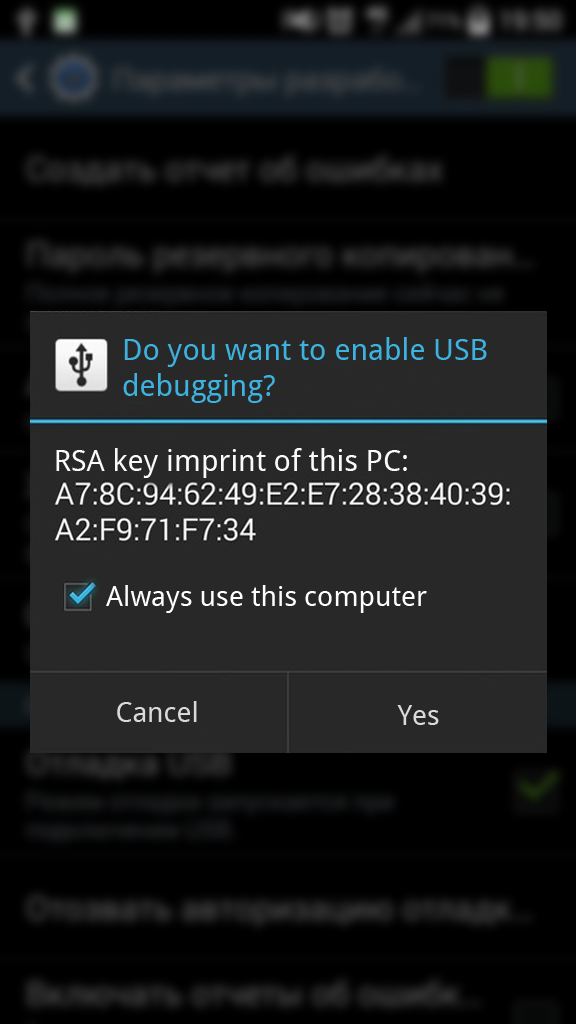 In order to check whether ADB sees your phone, use the command

If the computer does not recognize your device, click on the link:

After installing and configuring of the software, required for testing Android, you can start writing tests themselves and running them on a mobile device or emulator.