In this document some best practices and remarks are gathered, which were determined by our engineers during their work on projects, where the integration platform MuleESB is used.

1)  Naming conventions. Mule flow by itself and its components should have such names, which would give a clear understanding of what function they have. Standard names of components are allowed for transformation elements, but for other elements it is prefered to use more coherent names. For example:

2) The whole code, which can be used in other projects, should be brought out to the specific project/library.

4) There is a very powerful expression language in Mule, which allows making Mule components more dynamic. For example, Mule Expression Language allows dynamically defining addresses for http component. For this purpose, in the host field of http connector it is enough to use expressions of the following form:

5) For every flow should be realized its own exception strategy for correct exception handling.

IncomingExceptionHandler is a Java component (class) where the handling of the appeared exception and the formation of the answer can take place.

Besides the standard settings of the sftp-server connectivity, also can be useful the following settings:

8) Work with Queues. Mule allows working with different queues, which settings have a lot of common (name of the queue, operation – read/record), but with its specific features:

9) Profiling service.  A standard java/oracle utility, jvisualvm.exe can be used for profiling. It can be found by the following way Windows C:\Program Files\Java\jdk1.8.0_65\bin\jvisualvm.exe (in the bin catalogue of the installed jdk). This utility allows tracking resources which are used by java applications). The application can be loaded and resources spends can be tracked under the concrete loadings.

10) MUnit tests: mule flows should be covered by MUnit tests. Testing should be carried out on the different levels. If a flow contains several subflows, then it is desirable to test each of subflows separately and the flow, which uses them. In this case, MUnit tests are a very good example of using flow and its separable parts. Basic algorithms need to be covered by unit tests. We recommend to use Data Driven Testing if it is possible.

11) Load testing. JMeter can be used for Mule application load testing. This tool allows checking application work in the conditions of a big amount of incoming requests from many users and providing testing results in the convenient form for an analysis.

13) Deploy of the application. Mule Plugin for Maven server can be used to deploy the application to the CloudHub. Such parameters, as Mule version, user name, password, environment, business group, application name, etc. can be configured.

14) All components are recommended to perform by spring beans. 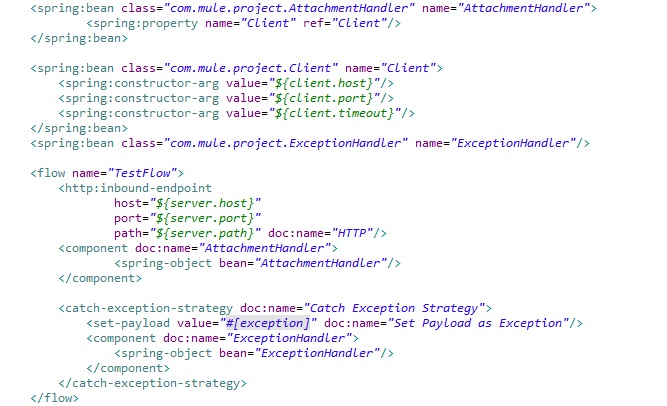